– The government’s budget proposal for 2023 includes a net borrowing requirement of EUR 8.3 billion. With redemptions of EUR 28.0 billion, the gross borrowing requirement amounts to EUR 36.3 billion
– Three new euro benchmark bonds can be expected in 2023, out of which the first is likely to take place in Q1
– Auction dates for Q1 have been published
– Finland’s GDP is projected to contract by 0.2% in 2023, following an increase of 1.9% in 2022. Inflation will slow and income growth will accelerate in 2023
– Prefer to read this is as PDF? Here it is.

Outlook for the Finnish economy and public finances

According to the latest economic forecast of the Ministry of Finance, Finland’s GDP is projected to contract by 0.2% in 2023, following an increase of 1.9% in 2022. A broad-based rise in prices has cut household purchasing power as incomes have not kept pace. However, inflation will slow in 2023 and income growth will accelerate.

The growth in world trade has remained brisk and will accelerate after 2023. Finland’s exports will also benefit from this growth. However, the loss of Russian markets will leave a permanent gap in exports. The current account is expected to have a small deficit in the coming years.

Employment in Finland recovered very quickly from the COVID-19 crisis. Employment growth has continued and the employment rate is currently, at 74.7%, at record high levels. The unemployment rate is expected to be 6.8% this year and to increase slightly next year. 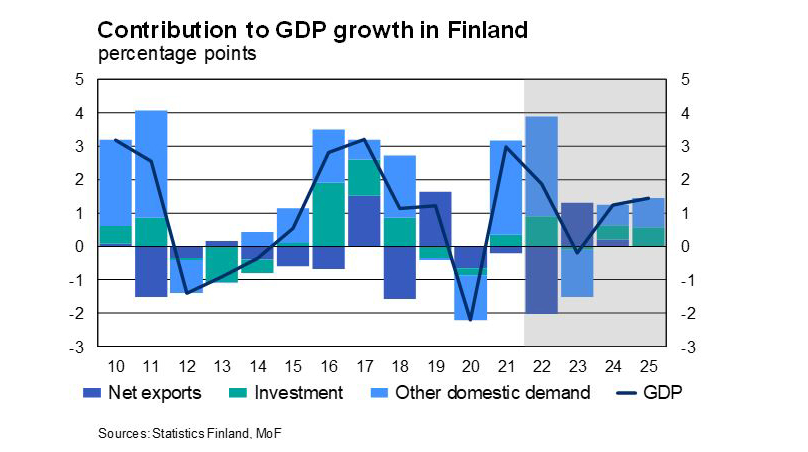 Latest on Finland and ESG: Finland’s total emissions in 2021 on level with previous year

Finland’s target is to be carbon neutral in 2035. Reaching this target will require reducing emissions and increasing carbon sinks. According to the Annual Climate Report 2022, reaching this goal is possible but uncertain as for the first time, the Finnish land use sector now emits more carbon than it traps. While emissions from Finland’s effort sharing sector decreased in 2021, those from the emissions trading sector increased. In 2021 total greenhouse gas emissions excluding the land use sector increased by 0.3 percent, compared to 2020.

Review of Treasury operations by the State Treasury, October to December 2022

In Q4, the Republic of Finland conducted auctions of serial bonds and euro-denominated Treasury bills. The results of these auctions are summarised below.

In addition to auctions, the tap window for Treasury bill issuance in EUR and USD-denominated bills was open in November, and issuance volumes in tap format were EUR 700 mio and USD 2155 mio in respective currency with various maturities.

The government’s budget proposal for 2023 includes a net borrowing requirement of EUR 8.292 billion. With redemptions of EUR 28.037 billion the gross borrowing requirement amounts to EUR 36.329 billion. The funding strategy of the Republic of Finland remains the same as in 2022 given the similarity in funding amounts.

Approximately 50% of the gross funding required will be funded in long-term maturities, and the rest will be covered with short-term Treasury bills. During 2023, three new euro benchmark bonds can be expected. The first euro benchmark bond syndication is expected to take place in the first quarter of the year.

In terms of bond maturities, the 10-year and 5-year benchmark bond maturities will be complemented by a longer maturity benchmark bond. The exact maturity of the long bond will be subject to market conditions while aiming at a balanced bond curve with liquid 15- 20 and 30-year maturity lines. As in previous years, issues under the EMTN programme can complement the euro-denominated benchmark funding during the year, market conditions permitting.

In addition to the new issues, auctions of existing euro benchmark bonds will be conducted. The State Treasury will publish a quarterly bond auction calendar for 2023. Auction dates together with target volumes are published quarterly in advance on our website: Serial bond auctions. The first auction will take place on 17 January. Full details of each auction are published a few days prior to the auction date post market consultation.

The auctions of euro-denominated Treasury bills in the first quarter of the year will take place on 10 January, 14 February and 14 March. The auctions will be arranged in the Bloomberg Auction System and are open to the RFTB dealer group. Further information on these auctions and a quarterly updated auction calendar will be published on our website: Treasury bill auctions.

In addition to Treasury bill auctions, a sporadic issuance window may open during the first quarter of the year. The timing of the Treasury bill issuance is subject to the liquidity position and refinancing needs of the central government. Treasury bills are issued in euros and US dollars with monthly maturity dates.

The next Quarterly Review will be published on 31 March 2023.