Three targets for the future:

The Climate Change Act will be reformed in such a way that the carbon-neutrality target 2035 can be achieved. New emission reduction targets by 2030 and 2040 will be included in the Act and the current emission reduction target by 2050 will be updated.The scope of the Act will be extended to also cover the land use sector, and a target concerning the strengthening of carbon sinks will be added.

An annual way of monitoring the implementation of the plans is the Climate Report. In the Annual Climate Report 2021, the Ministry of the Environment estimates that Finland is on the right track, but new climate measures are needed to attain carbon neutrality in 2035. These additional measures will be proposed in the new Energy and Climate Strategy, set to be completed and published during 2022. 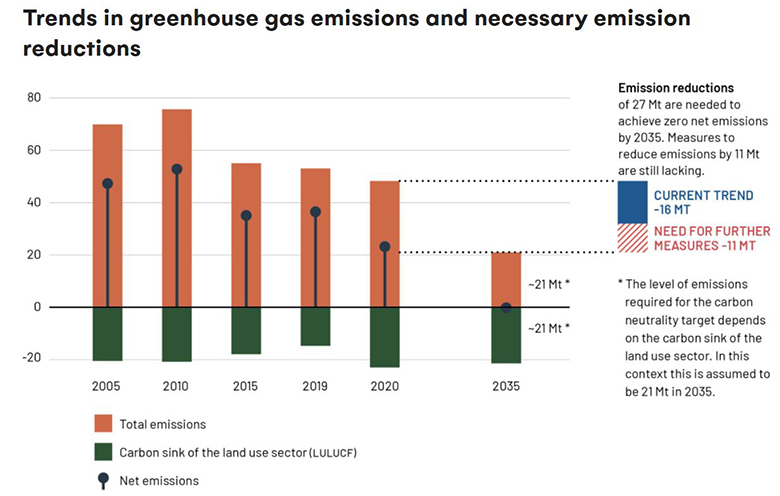 Net emissions mean the sum of emissions from the emissions trading and non-emissions trading sectors deducted by the net sink of the land use sector. Carbon neutrality requires zero net emissions. Instant preliminary data is given for 2020. Further measures are needed to reduce emissions by 11 million tonnes. Source: Ministry of the Environment, Annual Climate Report 2021.

At present, the key policy measures to achieve the climate neutrality target include: