Finland’s GDP growth accelerated to 3.4% in 2021, according to the forecast of the Ministry of Finance. The general government deficit, which has grown significantly during the COVID-19 pandemic, is expected to decrease rapidly in the next few years.

A high savings rate and optimism among consumers created a basis for rapid growth in private consumption. Private investments increased in 2021 and the trend in housing construction was positive. Global economic recovery, stimulus measures and the demand for Finnish exports in important trade areas increased both exports and imports. According to the Ministry’s forecast, inflation in 2021 increased to 2.2% and current account showed a small surplus. The unemployment rate was 7.6% in 2021. 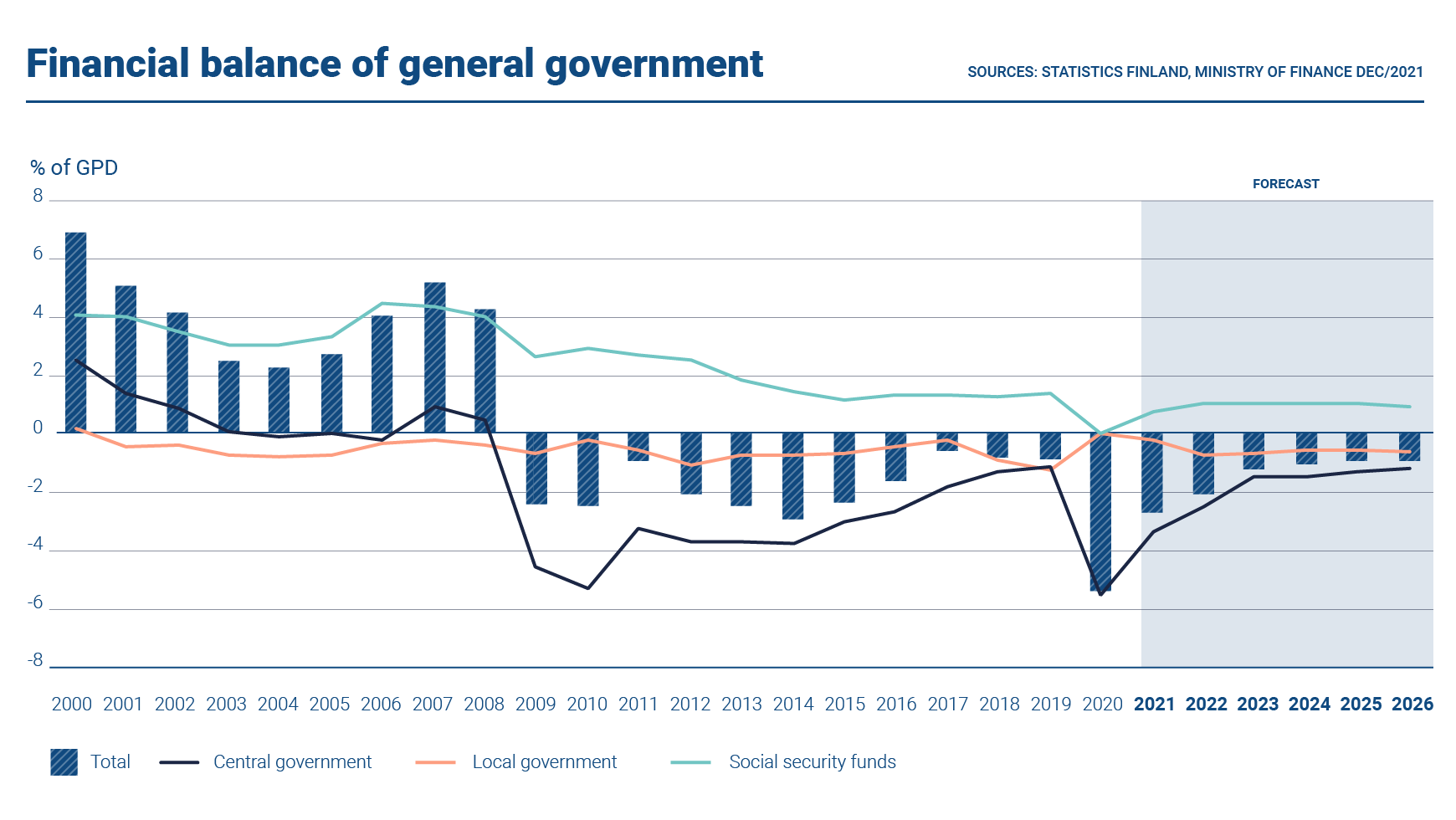 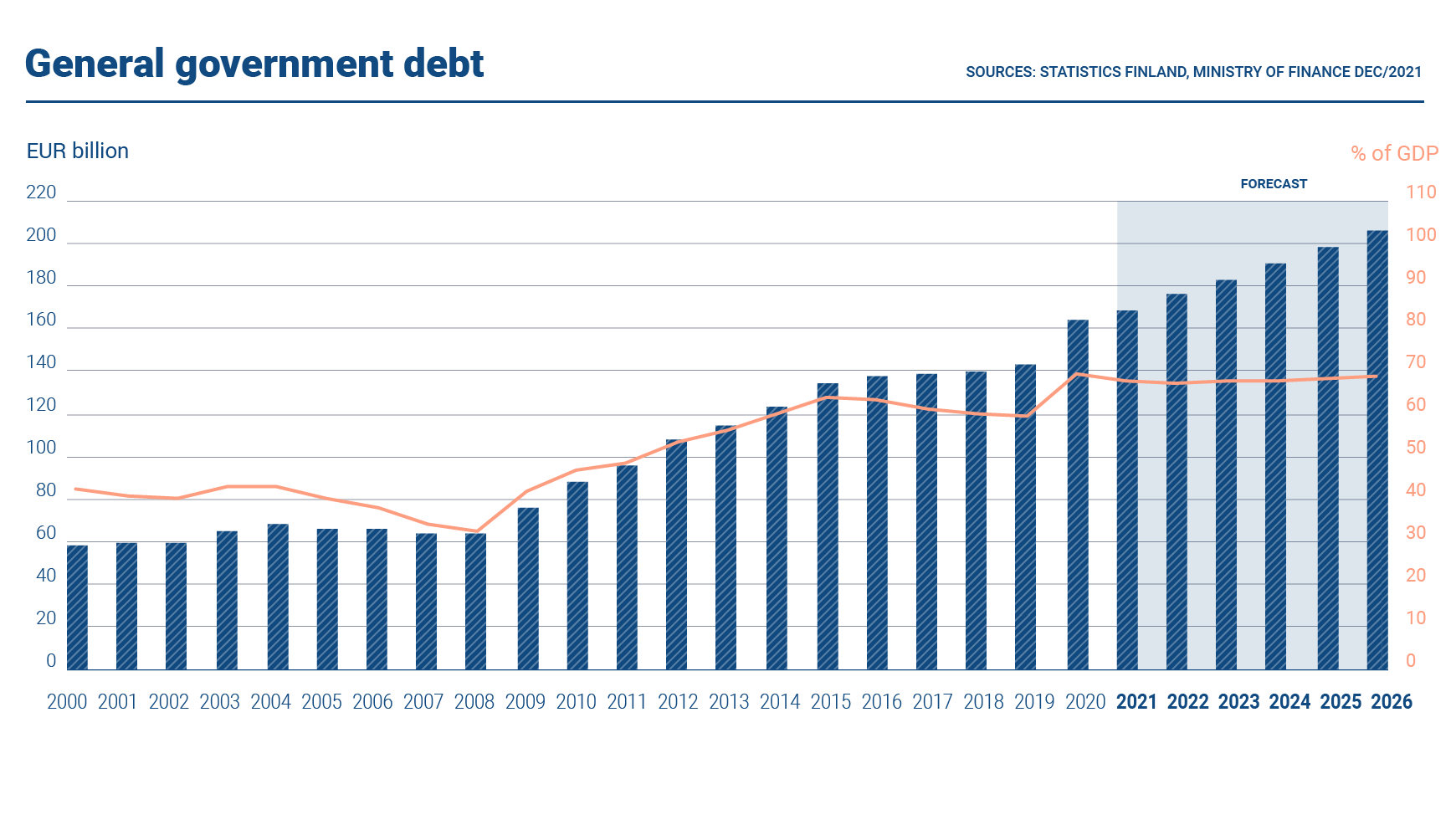 Finland’s relatively strong public finances and modern economy, among many other things, are reflected in Finland’s high credit ratings. The central government of Finland has solicited credit ratings from two credit rating agencies: Fitch Ratings and S&P Global Ratings. For long-term debt, they are AA+ with stable outlook from both credit agencies.

[1] All estimates are from the Ministry of Finance’s Economic Survey, Winter 2021.

The inflation expectations emerging in 2021 were reflected in the rising government bond rates both in Europe and the United States during the first half of the year. As fears of more persistent inflation have spurred central banks to harden their tone on accommodative monetary policies in the second half of the year, rates in these markets have moved back and forth in a range at historically low levels. Also, the risk of further pandemic waves of COVID-19 with new viral mutations have been adding to the mix of uncertainty in economic signals and thus also rates.

The monetary policy asset purchase programmes (APP) by the European Central Bank (ECB) in addition to its pandemic emergency purchasing programme (PEPP) have been accumulating central bank assets, including government bonds, at a steady pace during 2021. The APP net pucheses of government bonds have been running at about 15 bln euros monthly in addition to the PEPP purchases of about 60 to 80 bln monthly. The European Central Bank (ECB) has announced a tapering to the monetary policy purchases of government bonds in 2022 and an ending to net purchases under PEPP by the end of the first quarter. In that conjucture, the APP will be scaled up for the rest of the year with decelerating net purchases quarterly. As monetary policy operations have been key in keeping government bond rates low in 2021, their path in 2022 will certainly affect that of rates going forward.

With advancing asset purchases in 2021, the eurosystem central banks have become large holders of government bonds, also Republic of Finland government bonds (RFGBs). According to the Bank of Finland balance sheet, it can be estimated to hold approximately 50% of the outstanding RFGB stock at the end of December 2021. 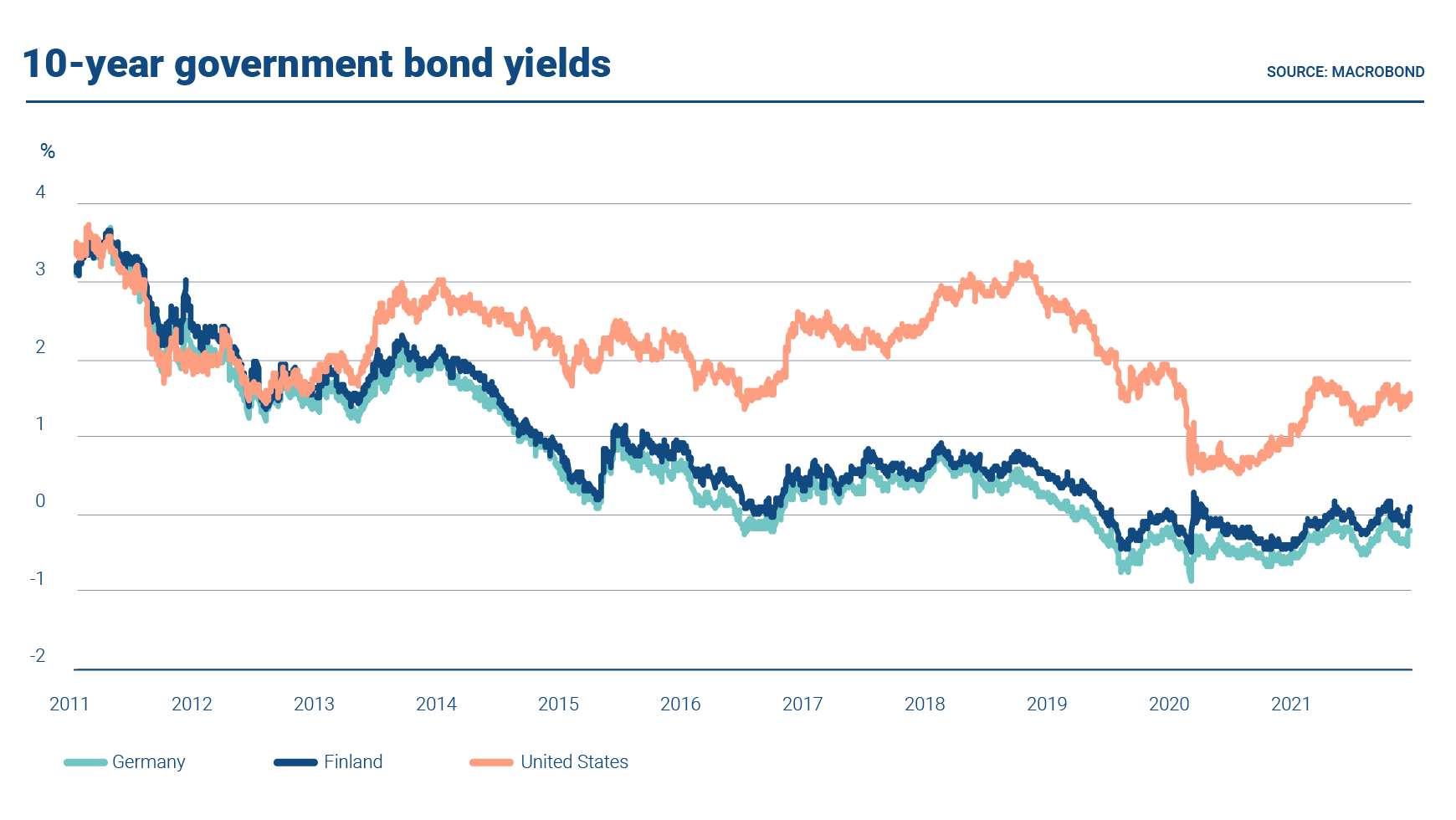 The secondary market trading levels of Republic of Finland government bonds (RFGBs) in the 10-year segment moved concurrently with those of other European governments in 2021, offering a yield pick-up over the Netherlands and Germany, while remaining tighter to France and broadly in line with Austria. The 10-year RFGB yield was positive in May-June and October but has remained in negative territory for most of the year. The yield curve steepness is demonstrated by the 30-year RFGB yield remaining positive throughout the year in approximately a 50 basis point range, peaking at about 0.75% in May. 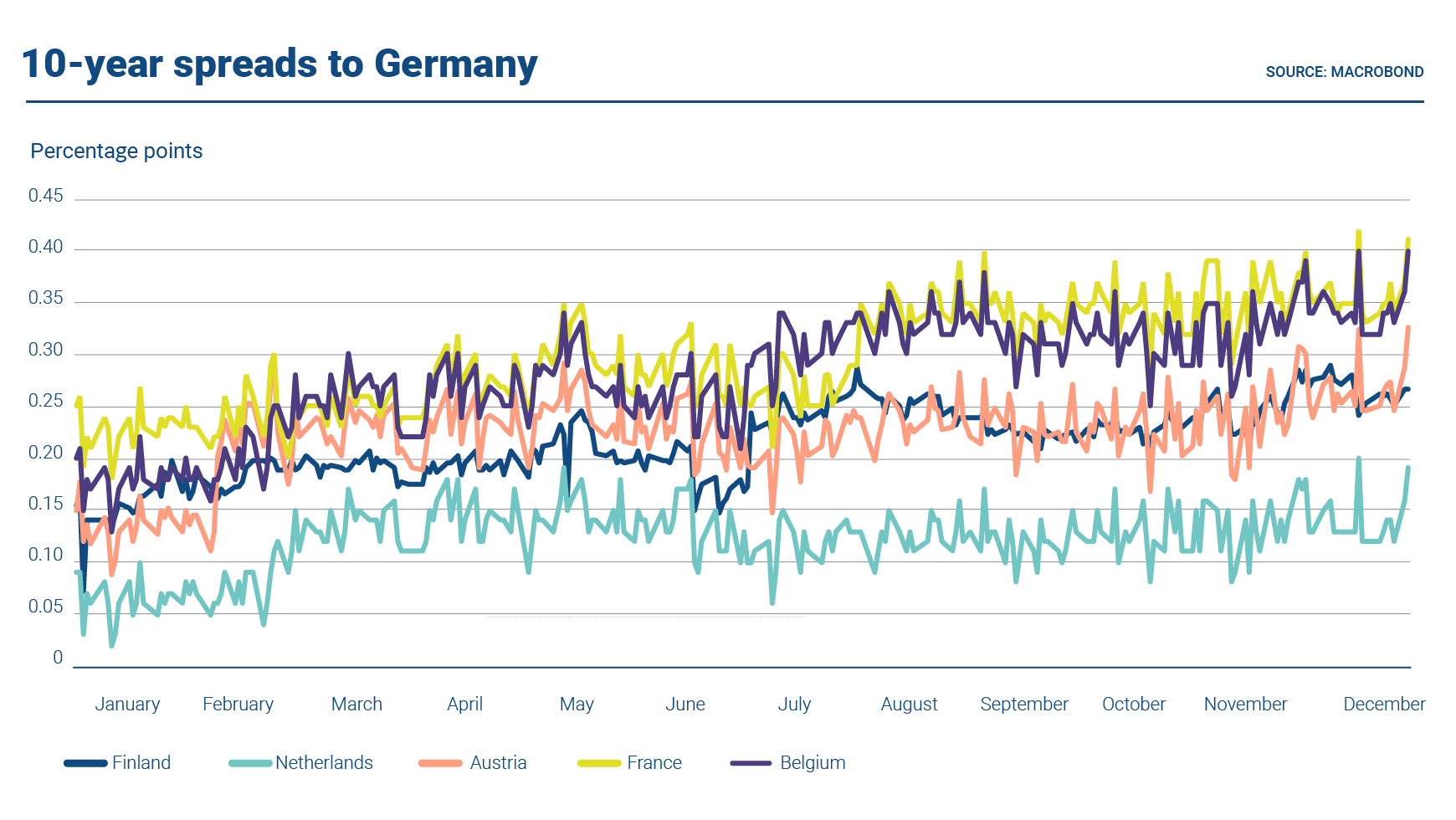 Secondary market liquidity for RFGBs, i.e. the euro benchmarks, even when somewhat affected by the monetary policy operations, has remained reasonable in 2021. Some signs of repo specialness have been observed particularly at the longer end of the curve, but overall repo market levels remained stable in 2021 and the market remains well accessible to investors due to a committed primary dealer network.

It is a priority for the State Treasury to work actively with the primary dealers to maintain and further enhance the liquidity of the Finnish government bonds. Finnish government benchmark bonds can be traded on the following interdealer platforms: MTS Finland, BGC eSpeed, and ICAP BrokerTec. The State Treasury does not participate in secondary market activity, and the interdealer trading is based on the activity of the primary dealers and other market participants. In 2021, the nominal interdealer trading volume was on average EUR 7.7 billion per month (EUR 5.0 billion in 2020).

The State Treasury actively follows the primary dealer quoting activity in the secondary markets. There are guidelines for the Primary Dealers on quoting for different maturities in the interdealer market, where the bid-offer spread of the price quotes is observed and tracked. The average bid-offer spread of all the market makers is calculated and each Primary Dealer benchmarked against the average. On a weekly basis, the State Treasury reports the analysed spread data for the benchmark bond quotes back to the individual Primary Dealer banks. In 2021, the bid-offer spreads in the interdealer market remained stable on average during the year with the exception of some widening towards year-end.

Primary dealers report customer trade volumes to the State Treasury within the Euro Market Activity Reporting (EMAR). The reporting takes place on a monthly basis, and the data is consolidated and used for monitoring and analysis. According to the EMAR data, the monthly secondary market customer turnover volumes have slightly decreased from the previous year. The average monthly turnover volume (sales and purchases) was EUR 8.5 billion in 2021 (EUR 9.4 billion in 2020). In relative terms, the monthly average turnover volume is around 8.2% of the outstanding euro benchmark bond stock (10.2% in 2020). 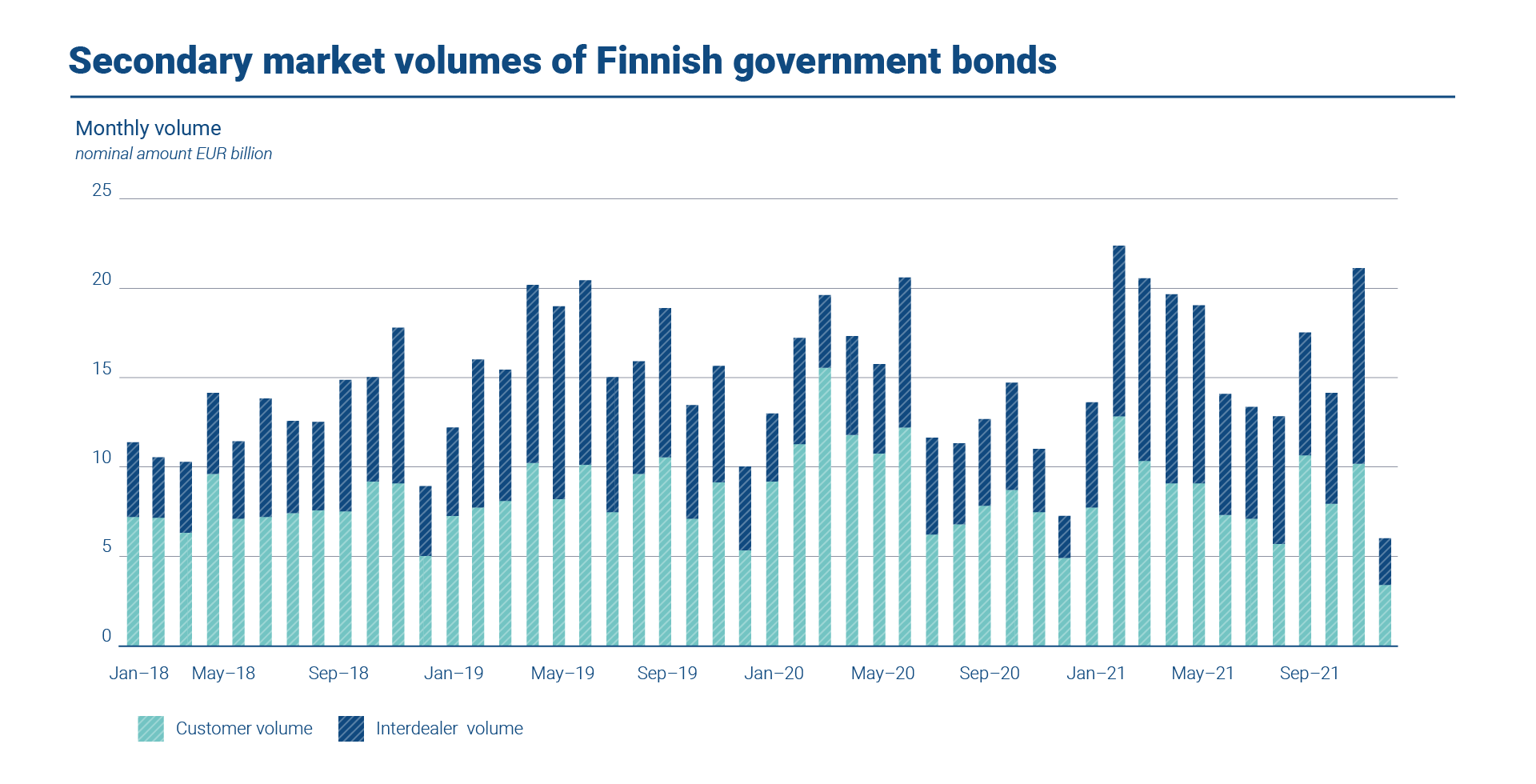