Realised budgetary gross borrowing in 2021 totalled EUR 27.8 billion. Of this amount, long-term issuance accounted for EUR 16.1 billion and the rest, EUR 11.7 billion, was short-term borrowing. The gross borrowing requirement for the coming years is estimated to remain around EUR 25-30 billion annually. 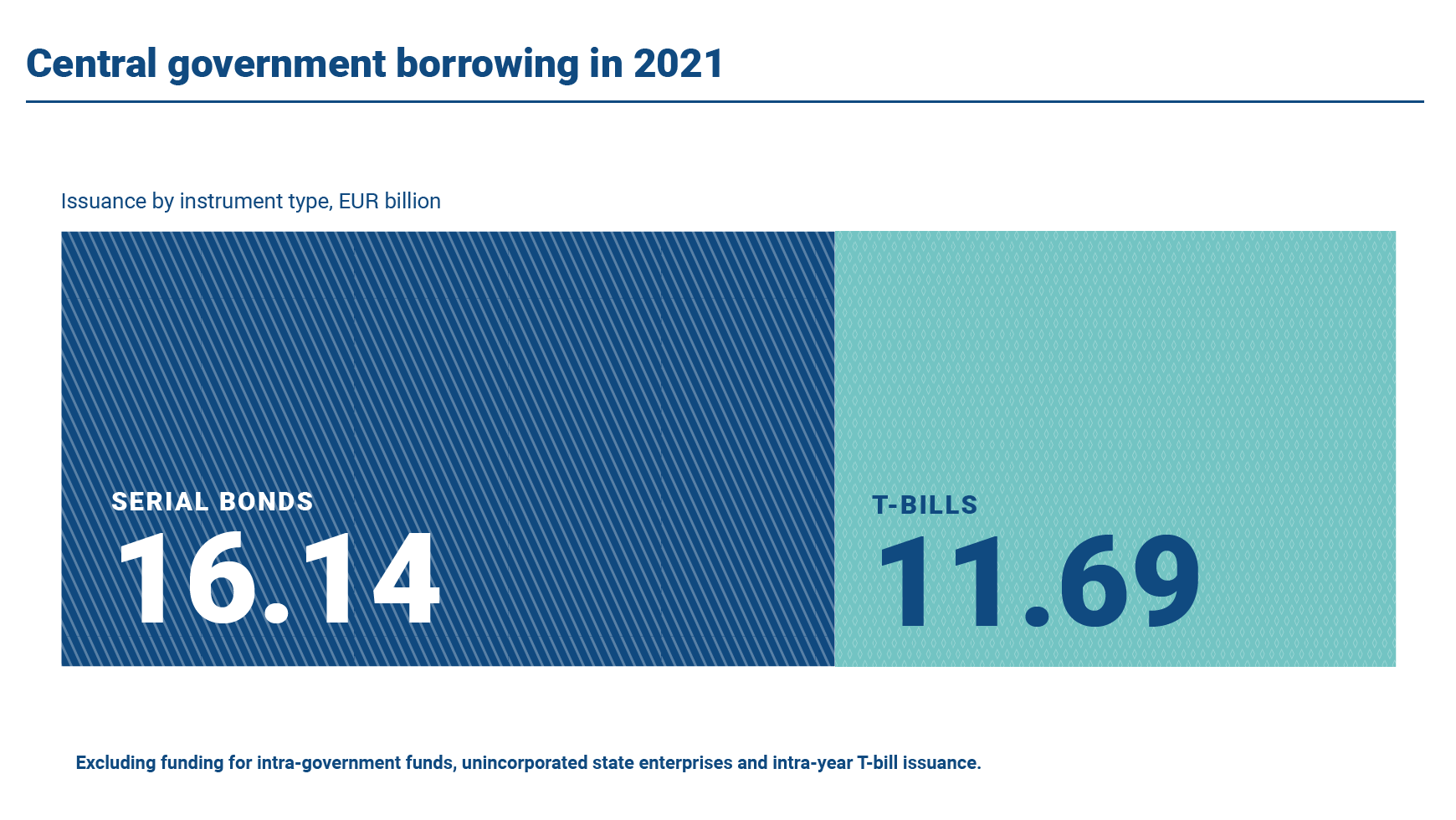 Restrictions on economic activities due to the COVID-19 pandemic were widely lifted in Finland due to the introduction of vaccinations in 2021. The ensuing economic recovery was reflected in the public finances in Finland. The Ministry of Finance projects a substantial reduction in general government deficit in comparison to 2020. The budgeted gross borrowing amounted to EUR 35.9 billion. However, some EUR 8 billion less funding, i.e. realised gross borrowing of EUR 27.8 billion, was sufficient to cover expenditure and safeguard sufficient liquidity and a cash buffer. Since 2011, it has been possible for realized borrowing to deviate from that budgeted, thus resulting in lower borrowing. These deviations are due to e.g. adjustments in income, expenditure and cash buffers and transfers of allowances designated for multiple-year use. These differences are accounted for in the government financial statements. At the end of 2021, the central government debt stock stood at approximately EUR 129 billion. 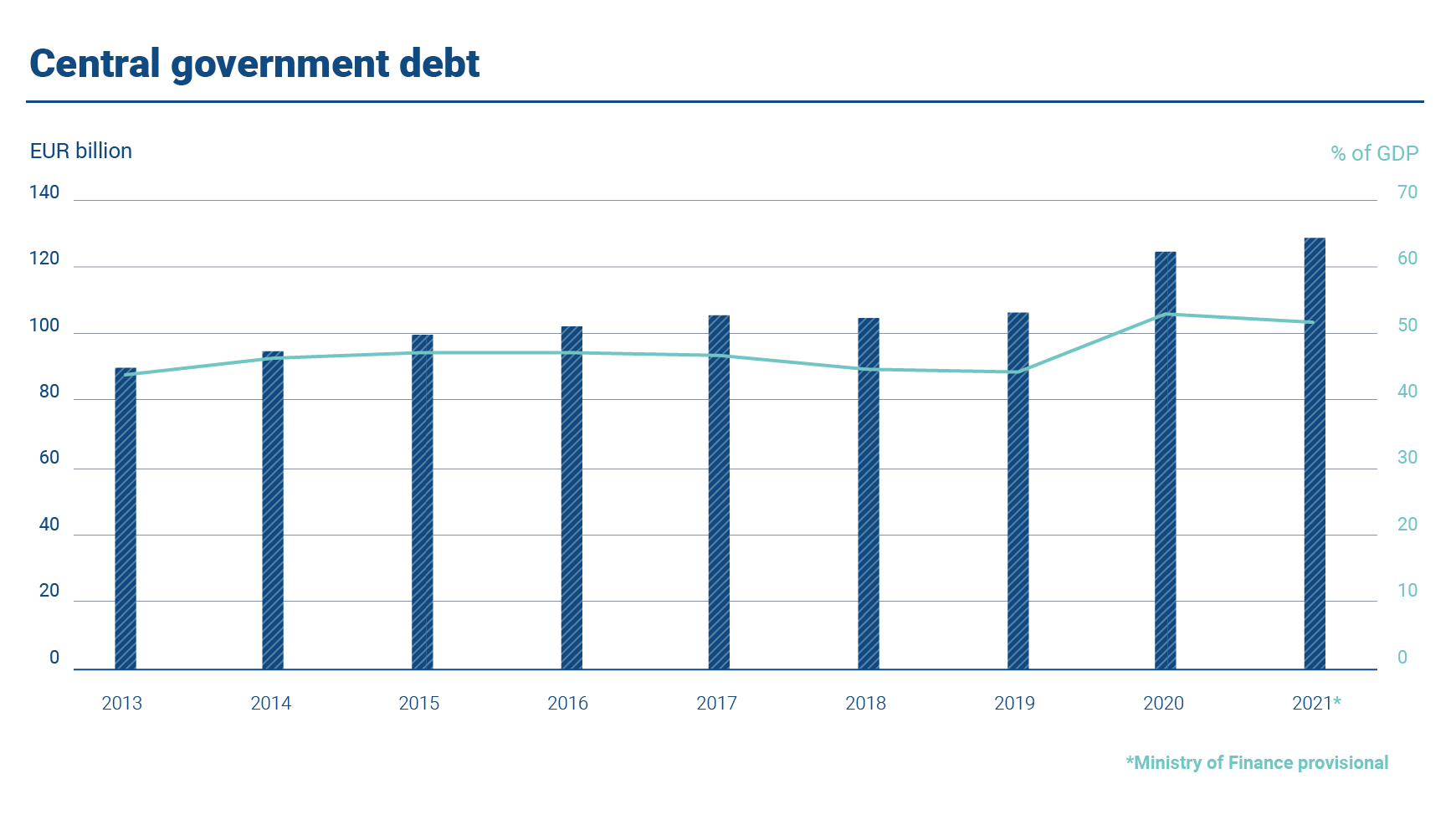 The net borrowing requirement for the year 2022 is EUR 7.04 billion, according to the budget.* There are EUR 21.64 billion of redemptions, which sums up to EUR 28.68 billion of gross borrowing requirement for the year. The funding strategy for the year 2022 is to issue three new euro benchmark bonds in syndications, and to tap existing euro benchmark bonds in regular auctions. To complement the long-term funding, issuance in other currencies than euro, potentially a USD benchmark bond, is being planned, market conditions permitting. The share of short-term funding, i.e. Treasury bills, is estimated to account for about 40% of the gross annual borrowing amount.

The funding strategy of the Republic of Finland is based on euro benchmark bond issuance. New benchmark bonds are issued in syndicated form. Syndications are complemented with bond tap auctions, which enable increases in the outstanding volumes of the existing bond lines. There is also a foreign currency bond issue programme, called the Euro Medium Term Note (EMTN) programme. The Republic of Finland is committed to issuing in other currencies than the euro to complement its euro-denominated borrowing and to serve a broader base of investors. However, issuance in foreign currencies is subject to market conditions and a reasonable funding cost in comparison to euro issuance.

The current funding volume supports three new euro benchmark bond syndications per year, tap auctions on benchmark bonds, and one benchmark-sized USD bond issue. The short-term funding is carried out by issuing Treasury bills. In terms of maturities, the focus is on issuing current coupon bonds in 5- and 10-year tenors annually. Subject to market conditions and to facilitate sufficient curve maintenance for a liquid benchmark curve up to 30 years, benchmark issues in 15, 20 and 30 years will be conducted accordingly.

The State Treasury is motivated to preserve Finland’s place in the global markets as one of the reliable and acknowledged bond issuers and thus maintain attractive debt instruments and bond issuance in the future.

In 2021, the Republic of Finland issued three new euro-denominated benchmark bonds and conducted seven benchmark bond auctions in total. The short-term funding was carried out via the Treasury bill programme. 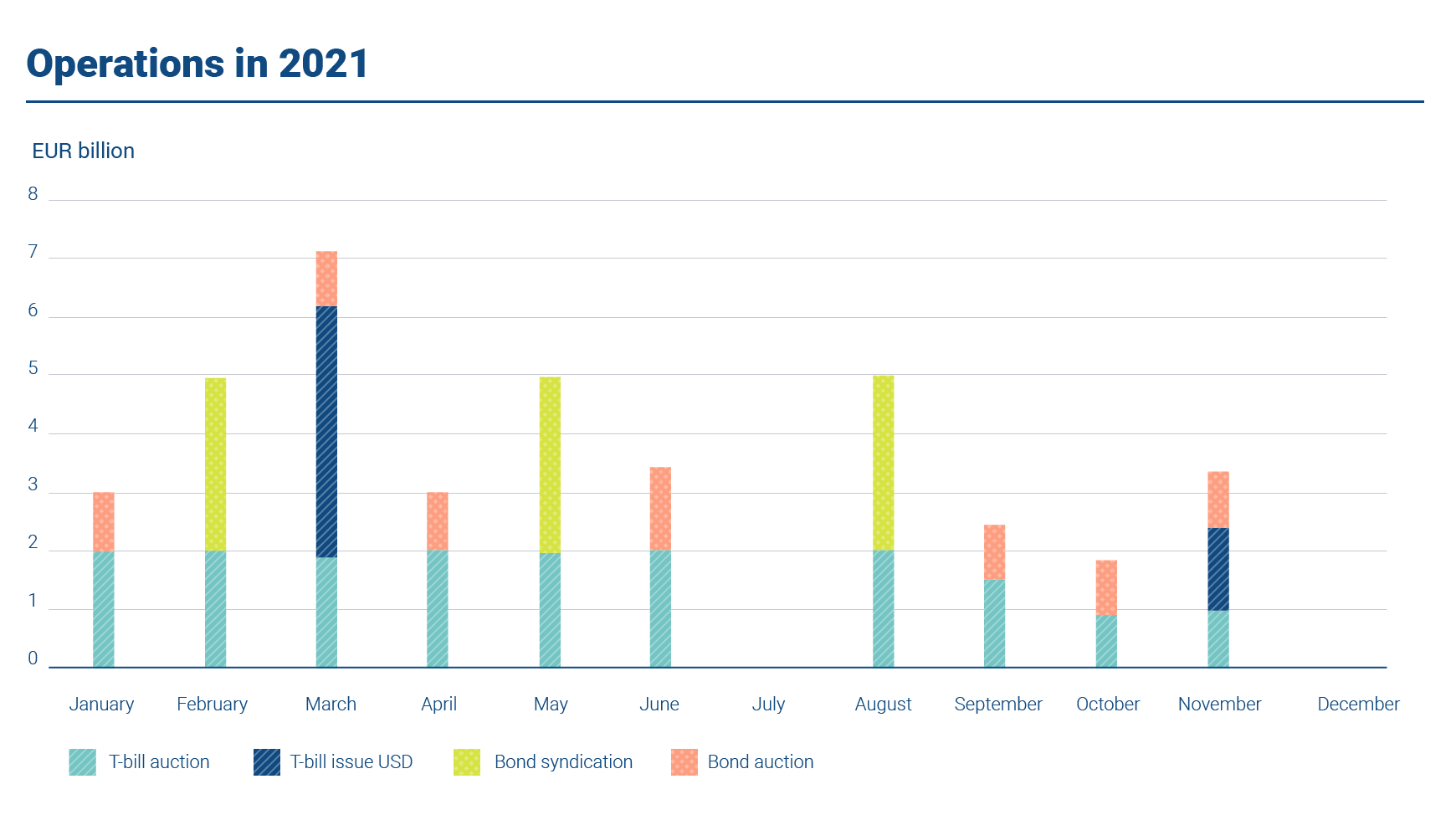 The second bond issue in May was a new 10-year benchmark bond. The bond met strong demand especially from the Nordics. The size of the issue was EUR 3 billion, attracting an orderbook of over EUR 13 billion from more than 110 investors.

The third and final syndicated issue of the year was a new 5-year benchmark bond. The bond was launched in late August, and despite the negative yield of -0.625% at issue, the order book grew to EUR 15 billion from almost 100 investors. The final issue size was EUR 3 billion. The trend of strong Nordic investor participation continued in this issue. 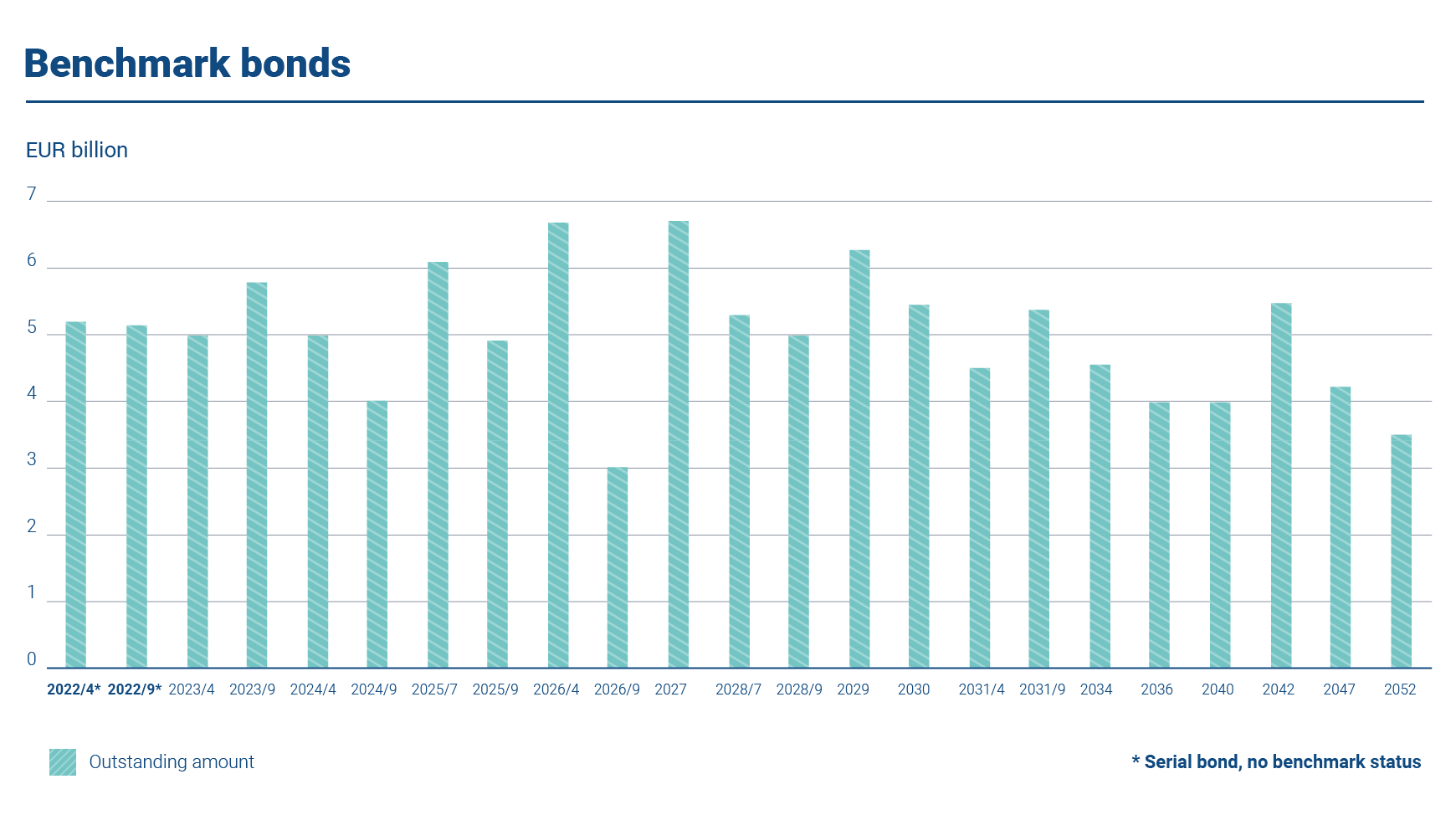 In 2021, the State Treasury started to publish a quarterly auction calendar on the Republic of Finland serial bond auctions, as the number of auctions grew due to the growing funding volume. In total seven tap auctions on existing euro benchmark bonds were conducted. All auctions for the government bonds are tap auctions for existing lines.

The auctions were held monthly, excluding months with primary market issuance and holiday seasons. The total funding volume via serial bond auctions was EUR 7 235 million. Three of the auctions were double line auctions, where two benchmark bonds with different maturities were auctioned on the same date. The bid-to-cover ratio, which describes the demand for the auctioned securities, varied between 1.4 and 1.99 in the auctions. The issued amounts were between EUR 443 million and EUR 1000 million per bond. 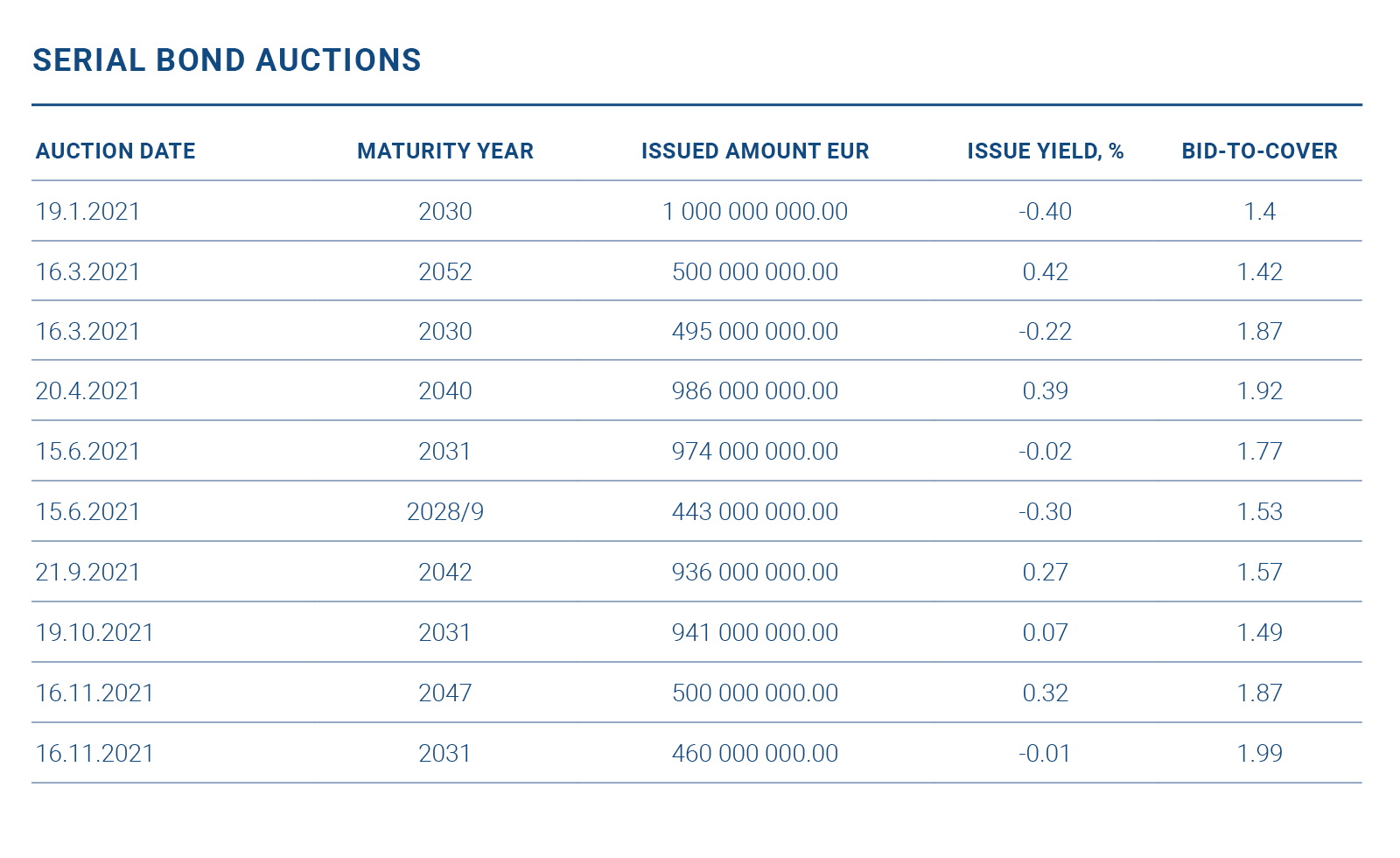 The State Treasury issues Treasury bills in euros and US dollars through banks included in the Treasury Bill Dealer Group, according to the financing needs of the central government and in line with guidelines set by the Ministry of Finance.

The State Treasury may also issue Treasury bills on other occasions, depending on the demand and financing needs, in which case the State Treasury defines the reference price for the issue. This issuance method resembles that of European Commercial Paper programmes (ECP).

The ECP-format Treasury bill issuance window in USD was open two times in 2021: in March and November. The gross ECP issuance in USD was USD 6 200 million.

The average maturity in USD ECP issuance was 6.3 months. The average maturity in auctioned euro-denominated Treasury bills was 8.5 months. The outstanding stocks of USD- and euro-denominated Treasury bills at year end were USD 1 600 million and EUR 10 363 million, respectively (USD 4 275 million and EUR 14 348 million in 2020).

The liquidity position of the central government remained strong during the year. The amount of cash reserves is based on an assessment of sufficient liquidity and a limit on uncovered net cash flows.

The cash reserves are invested for short-term maturities with low-risk counterparties.

Liquidity management relies strongly on the cash flow forecast system. All government accounting entities forecast their income and expenditures for the next 12-month period into the system. The State Treasury is using this data as a basis for liquidity management decisions.

On an annual level, the cash buffer accumulated to counter economic uncertainty for the end of 2020 was reduced to a more typical level of approximately EUR 4.7 billion at the end of 2021.