Realised gross borrowing in 2020 totalled EUR 39.3 billion. Of this amount, long-term issuance accounted for EUR 21.3 billion and the rest was short-term borrowing. The gross borrowing requirement for the near future is estimated to remain around EUR 35 billion annually.

The global pandemic and ensuing sharp economic downturn changed the funding requirement significantly during the first and second quarters of 2020. The initially foreseen gross borrowing of EUR 23.2 billion turned out to be almost doubled to over EUR 40 billion. This was a result of both increasing on-budget expenditure and falling tax revenues. Funding plans were revised to facilitate more borrowing. No new funding instruments were introduced, but the existing ones were employed more extensively and to some extent differently than before.

The final budgeted gross borrowing requirement in 2020 was EUR 40.7 billion, which included EUR 19.7 billion of net borrowing. However, the gross borrowing of EUR 39.3 billion was sufficient to cover expenditure on a cash-flow basis and safeguard sufficient liquidity. Since 2011, it has been possible for realized borrowing to deviate from that budgeted, thus resulting in lower borrowing. These deviations are due to e.g. adjustments in income, expenditure and cash buffers and transfers of allowances. These differences are accounted for in the government financial statements. The central government debt stock was EUR 124.8 billion at year end, i.e. EUR 18.5 billion higher than at the end of 2019.

According to the approved budget for the year 2021, the net borrowing requirement is EUR 11.8 billion. With redemptions of EUR  24.1 billion, the total borrowing requirement sums up to EUR 35.9 billion for the year. The strategy for the year 2021 is to issue three new euro benchmark bonds in syndications, tap extisting benchmarks in auctions and complement the long-term funding with issuance in other currencies, potentially a USD benchmark, market conditions permitting. Short term funding with Treasury bills will remain significant and is estimated to account for about 50% of gross annual borrowing.

The funding strategy of the Republic of Finland is based on euro benchmark bond issuance. New benchmark bonds are issued in syndicated form. Syndications are complemented with bond tap auctions, which enable increases in the outstanding volumes of the existing bond lines. There is also a foreign currency bond issue programme, called the Euro Medium Term Note programme. The Republic of Finland is committed to issuing in other currencies than the euro to complement its euro-denominated borrowing and to serve a broader base of investors.

The current funding volume supports three new euro benchmark bond syndications per year, tap auctions on benchmark bonds, and one benchmark-sized USD bond issue. The short-term funding is carried out by issuing Treasury bills. In terms of maturities, the focus is on issuing current coupon bonds in 5- and 10-year tenors annually. Subject to market conditions and to facilitate sufficient curve maintenance for a liquid benchmark curve up to 30 years, benchmark issues in 15, 20 and 30 years will be conducted accordingly. In 2020, in response to the rising funding requirement, the 20-year maturity for new issues was introduced for the first time.

The State Treasury is motivated to preserve Finland’s place in the global markets as one of the reliable and acknowledged bond issuers and thus maintain attractive debt instruments and bond issuance in the future.

In 2020, the Republic of Finland issued three new euro-denominated benchmark bonds and conducted four tap auctions. In addition to auctions and syndications, euro benchmark bonds were issued in private placement transactions during the second quarter of the year. The short-term funding was carried out via the Treasury bill programme. 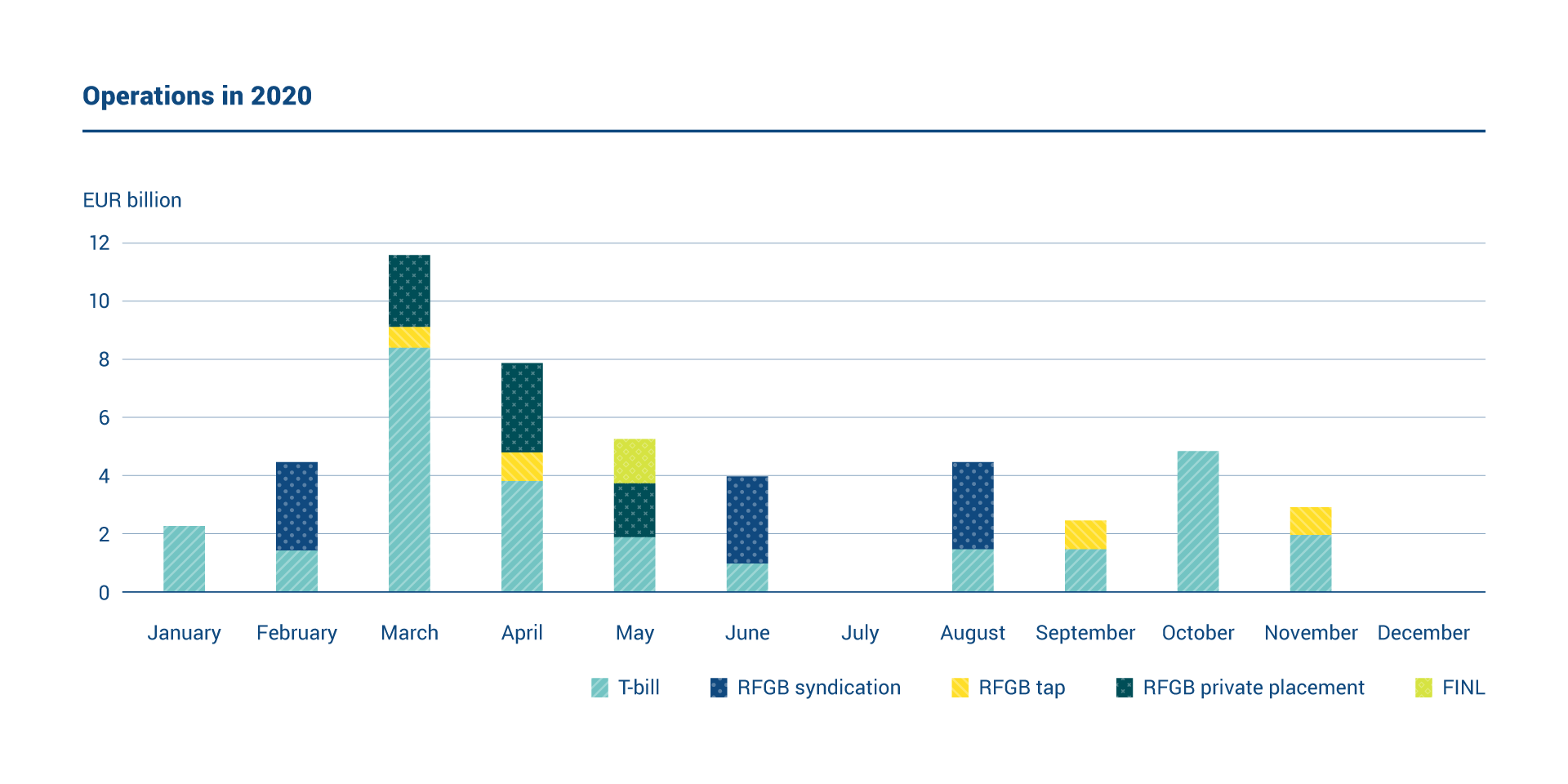 Three new benchmark bonds were issued in syndications. The first bond issue in February was a new long 15-year benchmark bond with a 2036 maturity. The issue size of the bond was EUR 3 billion. The syndication attracted over 160 investors and an order book of over EUR 21 billion.

The second bond issue in June was a new 20-year benchmark bond of EUR 3 billion. The bond was met with strong demand despite the low yield – a re-offer yield of 0.30%. The order book grew to over EUR 25 billion, with over 220 investors expressing their interest on the bond.

The third syndicated issue of the year was a new 10-year benchmark bond launched in late August. The issue size was EUR 3 billion, with an order book of EUR 27 billion from more than 150 investors. The re-offer yield of the issue, -0.217%, was the first negative yield in this maturity in a Republic of Finland syndication.

During the escalation of the pandemic crisis in early spring government bond market yields and spreads  increased. This induced demand for Republic of Finland benchmark bonds while at the same time market liquidity deteriorated making it challenging to execute larger orders. To cater for end-investor demand under these circumstances, private placement issues were conducted with primary dealers in ticket sizes larger than secondary market lots. The bulk of euro benchmark bond tapping in this format took place in maturities between 5 and 10 years and provided in total EUR 7 350 million of long-term funding in the second quarter of the year.

The first auction of the year was conducted in mid-March for the benchmark bond maturing on 15 September 2024. The auction increased the outstanding stock of the bond by EUR 715 million to EUR 3 715 million. The bid-to-cover ratio of the auction was 1.5.

The second auction, held in late April, brought the outstanding volume of the benchmark bond maturing in 2029 from EUR 4 172 million to EUR 5 173 million. The third auction took place in late September for the new long 15-year benchmark bond maturing on 15 April 2036. The outstanding volume of the bond grew by EUR 1 000 million and was EUR 4 000 million after the auction.

In November, the fourth and final auction of the year was conducted for the new 10-year benchmark bond maturing in 2030. The outstanding amount of the bond increased by EUR 951 million reaching a total amount of EUR 3 951 million. The bid-to-cover ratio was 1.53.

Following its established funding strategy, the Republic of Finland launched a new USD-denominated bond in an inaugural maturity in May. The 10-year bond issued under the EMTN programme amounted to USD 1 500 million and attracted interest from over 102 investors and an order book of over USD 4 600 million. The issue was hedged for currency risk.

The State Treasury issues Treasury bills in euros and US dollars through banks included in the Treasury Bill Dealer Group, according to the financing needs of the central government and in line with guidelines set by the Ministry of Finance. In 2020, short-term funding was employed as a flexible tool to respond to the rapidly increasing funding needs and its share of total annual gross funding rose from the typical 30% to 50%.

The State Treasury may also issue Treasury bills on other occasions, depending on the demand and financing needs, in which case the State Treasury defines the reference price for the issue. This issuance method resembles that of European Commercial Paper programmes (ECP).

The liquidity position of the central government remained strong during the year. The amount of cash reserves is based on an assessment of sufficient liquidity and a limit on uncovered net cash flows. In response to volatile market conditions and economic uncertainty due to COVID-19 there was a significant increase in cash reserves during the second quarter of the year.

The cash reserves are invested for short-term maturities with low-risk counterparties.

Liquidity management relies strongly on the cash flow forecast system. All government accounting entities forecast their income and expenditures for the next 12-month period into the system. The State Treasury is using this data as a basis for liquidity management decisions.